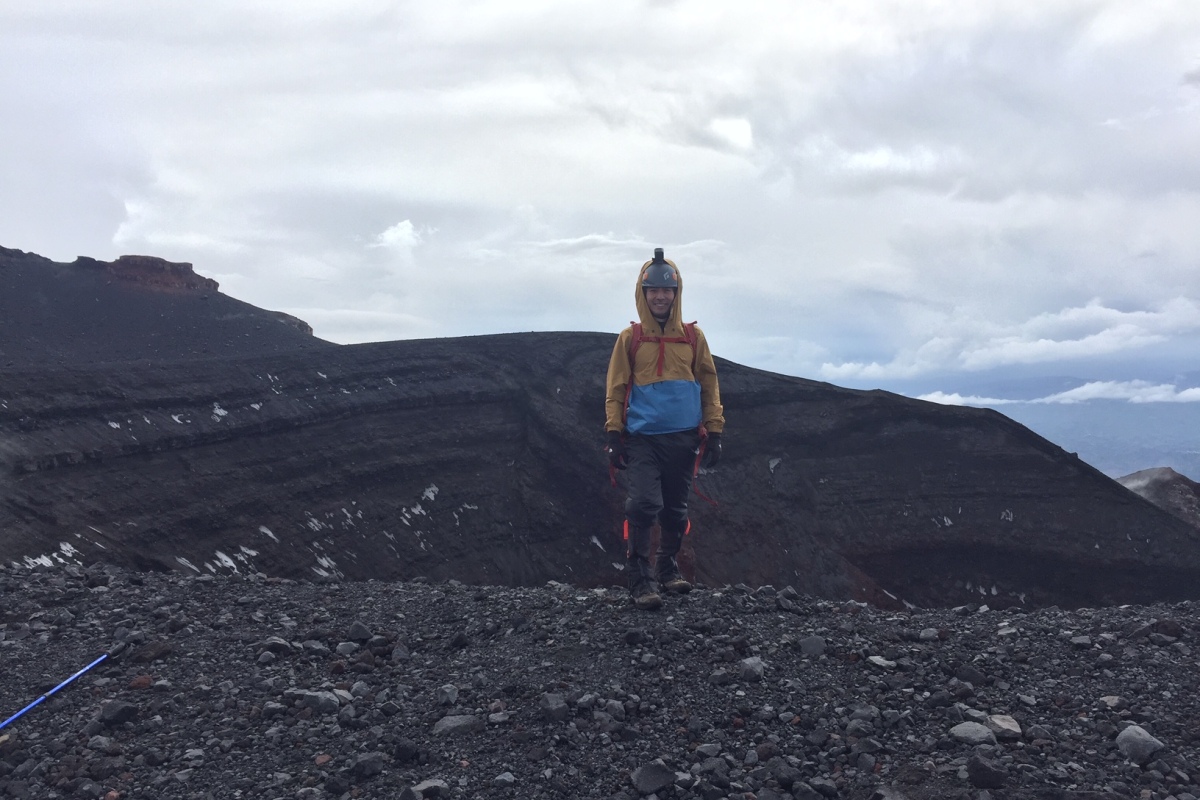 Just 2 years ago, Tungurahua was in volcanic activity and erupted. The idea of climbing it was out of the question back then but today its accessible to visitors and climbers. Its name comes from the Quechua language and it means “Throat of Fire”. As Ecuador’s ninth highest peak at 5,023m, the climb is usually done in 2 days but my friends and I decided to give it a shot in 1 day.

The climb begins by Pondoa, just before reaching Baños (about 2.5 hours from Quito). Be well prepared to carry the essentials for bad weather (waterproof jacket and pants, gaiters, hiking boots, headlamp, plenty of water, etc.). The climb begins with a humid and muddy terrain that is steep and it took us about 2 hours to reach the refugio. Most people sleep over at the refugio and continue the climb the next day.

This refugio is pretty much abandoned and does not have the facilities like the Cotopaxi refugio. Although there was drinkable water there and it helped a lot. After a 15 minute break, we continued the actual climb to the top. Its very steep and sandy (we call it arenal) with lots of loose rocks. It seemed endless but you have to take it slowly, step by step. Sara and Brittany took the lead with other people and Hernan and I stayed behind at our own pace. After a while, it became impossible to see them with all the fog.

For moments I felt that I was too tired to continue but we took short breaks for snacks and water to get some more fuel and kept going. As mentioned before, there are lots of loose rocks so it’s important to wear a helmet in the “arenal” section. This is a serious climb, especially if you do it in one day. It’s a climb that gets very mental as you have to motivate yourself and others to continue.

As Hernan and I were reaching the top, we saw some people coming down and Brittany and Sara were super relieved to see us. They turned back with us to see the crater but it was foggy so we couldn’t really see it. We took some photos and we started to descend. I was super tired but happy to reach the crater (we couldn’t continue to the summit (about 30 more mins) as it was getting late.

After a few minutes of descending, it started clearing up completely and I told Hernan that we had to go back to see the crater. The girls continue descending. When we reached the crater it’s when I knew that all the pain and suffering of the climb had been worth it. I climb mountains not only because I’m passionate about them, but because it makes me feel more alive. Seeing that crater was a beautiful moment that I will always remember. If it was easy to climb with mountain, more people will do it. But it definitely pushed me to my limits, almost as much as my first big climb of Cayambe.

The descent was brutal, especially for the knees. The climb down after the refugio was the most painful and challenging one for me, as my legs were burned out and we had to climb in the dark with headlamps. Another volcano, another goal. 10.5 hours of climbing in one day. The pain was worth it but I don’t think I’ll climb Tungurahua in the near future. Maybe next time it’s better to climb it in 2 days and make it to the main summit. 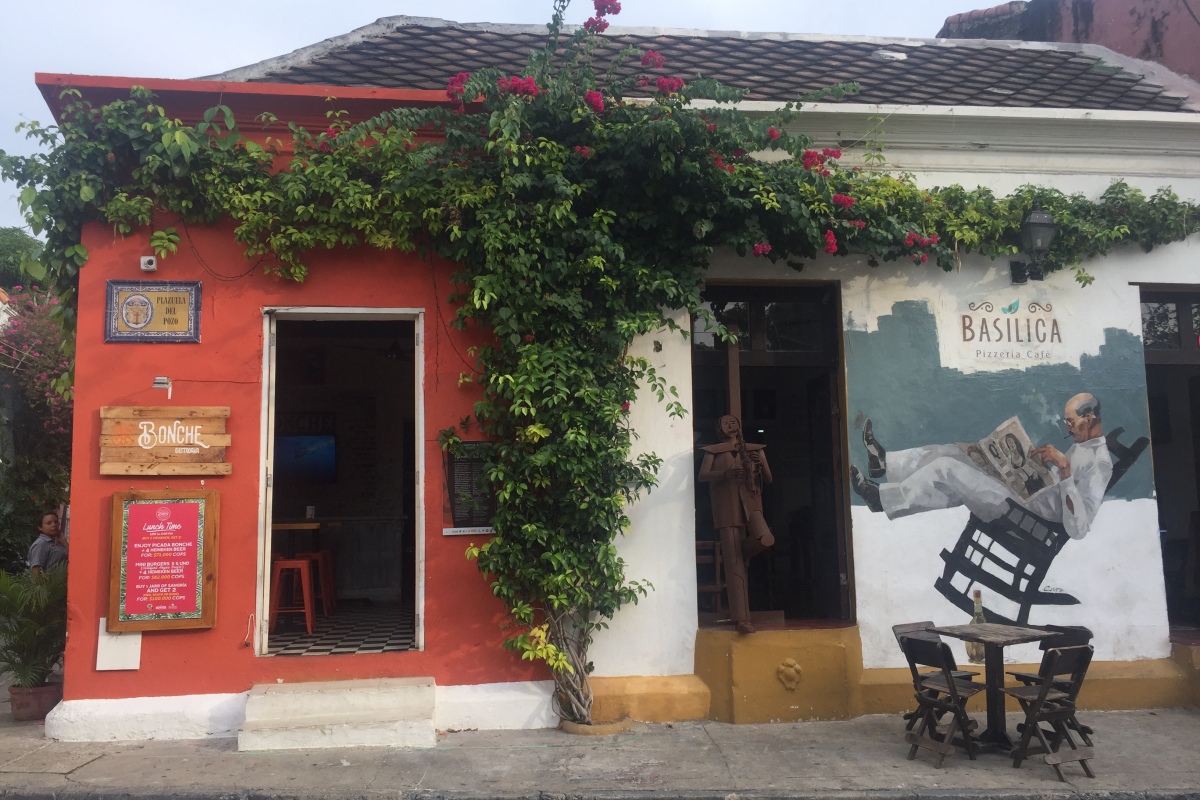 One of Colombia’s most incredible destinations, Cartagena de Indias is a city full of color, history and colonial style architecture. A flight that is just about an hour away from Bogota, this city is must if you want a true Caribbean experience in South America.

As soon as you get off the plane, you can feel the warmness of this place. The airport has an interesting taxi system in which you tell a cashier your destination and they give the driver a receipt with the amount that has to be charged to the passenger.

The hostel that Brittany and I chose was Casa Del Pozo Boutique, surrounded by cool restaurants and a short walk to Ciudad Amurrallada. The rooms are comfortable and breakfast is included. We started our day by having lunch at Bonche Gastrobar. A great place if you love a good greasy burger (it comes with lots of cheese inside of it!).

As you walk around this city, you’ll find many awesome murals on the walls that you can just stare for a while. We were lucky to see a work in progress artwork and at the end of our trip, it was completed. Our first stop was at Iglesia de la Trinidad. Around this church, there is a small plaza that gets pretty crowded at night while street performers do their thing. Then, we headed to the museum of modern art, located inside of Ciudad Amurrallada. Its relatively small, but contains good artwork from local artists as well as artists around the country.

The next day, we went to Tierra Bomba Island. We were told to take the small boats that go to the island and depart from the hospital (turned out to be a bad idea). As soon as our taxi got there, we were surrounded by 10 men, trying to get us to go on their boat. It was kind of overwhelming so we told our cab driver to just drive away. We ended up going to a beach close by, which wasn’t too nice but at least we were able to breathe. We rented a beach tent and the person that rented us the tent, told us that he could get us to the island with a friend. It was about 40k pesos for both of us and it seemed like a reasonable price.

When we got to Tierra Bomba, there were some small cabañas and food places. It was nice that it wasn’t too crowded but expect to be approached by some locals trying to sell you all kinds of things. The day was nice and clear and we had cool views of the Cartagena skyline.

For lunch, we went for tacos at Maria Bonita. Since it was kind of late, there were not too many people and our tacos were served quickly. If you eat a lot, I recommend ordering 2 portions of tacos. The chicken tacos with aji made the visit worth it.

Afterwards, we visited Castillo San Felipe de Barajas. One of the most touristy places in the city but for a reason. The castle was built in the 1500s and used as a fortress against invaders and enemies. It has been renovated since then, but it’s still amazing to see such an old construction still standing on this day. You can see that canons they used as a defense mechanism and even walk under the castle.

If you love a good steak, pay a visit to Morzola Parrilla Argentina. You won’t be disappointed by their bife de chorizo. Ciudad Amurallada is not only full of colors and beautiful buildings and architecture.

Anyways, Cartagena is a city that is well worth the visit. Tons of things to do to keep you entertained and amazed for days. You’ll have to come and experience the colors of the streets and buildings on your own!